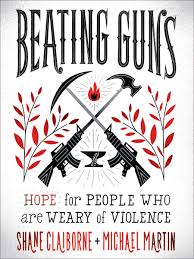 Beating Guns is a Christian moral reflection on the gravity of American gun violence. The book explores through historical inquiry, empirical studies, and political analysis our contemporary epidemic of gun violence. Claiborne and Martin develop the recognition that American gun violence is unnecessarily deadly and unique. As Christians, their ethical response is rooted in their theology of nonviolence that claims God calls Christians to co-create with God a world where guns are beaten into plowshares (i.e. Isaiah 2:4). A world that knows peace because it has forgotten violence. Their theological ethics establish the claim that Christians have a moral responsibility to end gun violence. And their political analysis reveals that reducing gun violence is democratically possible.

The book begins with an exegesis of Isaiah 2:4 and Micah 4:3: “they shall beat their swords into plowshares, and their spears into pruninghooks; nation shall not lift up sword against nation, neither shall they learn war anymore” (NRSV). Though the authors explore other Scripture passages, particularly Jesus’s Sermon on the Mount in Matthew, it is the prophet’s words which are the inspiration for the book’s title and form the authors’ central theological and ethical claims about gun violence. They interpret these passages to mean that God intends for God’s people to be of peace not violence, and thus they are called to transform their weapons into gardening tools. Claiborne and Martin, in connecting these passages for engaging present day gun violence, interpret its moral claim both theologically and literally. Theologically, it means Christians are called be a people of peace which means confessing and repenting of our addiction to violence. Literally, it means Christians are called to take their weapons and transform them into garden tools. Thus, the ethical response to gun violence is not more guns, but rather transforming our instruments of death into instruments of agriculture and life. This literalness is embodied within Martin’s work with RAWtools where blacksmiths convert guns into garden tools. Martin’s work provides their exegesis of Isaiah and Micah a real-life grounding through stories about the healing and transformation gun owners, those who’ve attempted suicide, and victims of gun violence have experienced through the ritual of beating guns into garden tools. Their theological conviction therefore is not some pie-in-sky idealism, but is evidenced as tangible, realistic, and a faithful alternative to our country’s current responses to gun violence.

The book transitions from a Christian theological engagement to a establishing a “thick description” of American gun violence through an historical, political, empirical, and social analysis. They conclude that U.S. gun violence is unique to our country and that we can democratically reduce its deadliness. Each lens of their analysis is intended to reveal that gun violence is not some amorphous problem lacking any definitive cause and thus any definitive solution. Historically, they point out how the U.S. domestic gun market was created by entrepreneurs who were concerned solely for profit, with no concern for safety and morality. Politically, they argue that the National Rifle Association’s (NRA), through the garnering of immense political power, has irresponsibly misinterpreted the U.S. Constitution’s 2nd Amendment to mean that one’s right to own a weapon is practically limitless. The NRA’s power and lobbying has enabled the gun industry to have the least regulation of any industry in the country (indeed, I was surprised to learn a Nerf Gun has more regulation than an AR-15, p. 94). The authors employ various studies and statistics to empirically establish and support their claim that U.S. gun violence is unique and largely preventable. Furthermore, they use these studies to reveal that the vast majority of Americans support “commonsense” gun laws, pragmatically pointing out that gun violence has an easily democratic solution (p. 109). Socially, they examine gun violence through the lenses of race, gender, and sexual violence to relate how our country’s proliferation of weapons is especially endangering to minorities and women—especially when considering America’s track record of legally protecting white men from punishment for their violence. Their thick description leads Claiborne and Martin to resolutely assert that American gun violence is an epidemic that is uniquely American and yet can be democratically solved. We have a gun problem, and more guns are not the answer.

Yet the authors do not stop with their socio-historical analysis. Rather, it prompts them to a deeper delve into the “heart” of the gun violence issue. They analysis invites them to reflect not just onto the issue of guns, but also on a society that teaches and cultivates such grave gun violence. The authors, in a step of personal honesty and conviction acknowledge that violence’s roots are not found in our weapons. Rather, violence emerges from the human heart, and therefore violence is something all humans wrestle with. This painful acknowledgement leads Claiborne and Martin to assert that we don’t just have a gun problem. We as a country have a heart problem as well. Accordingly, we all are responsible for gun violence; we all have a role to play in transforming our communities for peace.

The importance of the claim that America has a gun and heart problem cannot be understated. Especially in considering the authors’ goal of elevating the contemporary gun debate above its partisan political absolutism that dominates our legislation and impedes any tangible progress for reducing gun violence. For this contemporary debate is characterized by scapegoating and blaming the other side of the aisle, damming up any possibility for communal and holistic change. Yet if we take Claiborne’s and Martin’s claim seriously, then we cannot demonize the “other” through identifying them as “the problem.” Not only does such shaming inhibit moral responsiveness, it breaks down the ability for the public square to hold true dialogue. Dialogue where people can authentically share their stories and hear another’s. America is a democracy, and if we are to democratically solve the epidemic of gun violence we must stop dividing ourselves by projecting our own responsibility onto others. It is this misstep that Claiborne and Martin are explicit and intentional not to repeat. Not only do they recognize the violence’s universality by recognizing its cultural and social roots, they also repeatedly claim that gun owners are not the problem. They habitually cite statistics that the vast majority of gun owners support commonsense gun laws and are not represented by the NRA (the NRA represents only 5% of American gun owners).

I deeply appreciate their claim that gun violence is a gun and heart problem, because quite frankly, if the present-day debate was going to reduce gun violence it would have accomplished this already. Yet, I also appreciate their claim because it informs renewed ways of dialogically engaging one another as a means of “changing the dynamic of the gun debate” (p. 243). For in universalizing the responsibility for violence, Claiborne and Martin lay the framework to having a transformational and pragmatic engagement on gun violence. They assert that we change the gun debate by sitting together and listening to each other; by becoming a community of story-tellers and story-listeners. Though simple, it is profound. How much of the present gun debate is characterized by genuine sitting with and listening to one another? To hear and bear witness to another’s story, be it the tragedy of victimization or family bonding over an afternoon of skeet shooting? And truly, it is consistently people’s personal stories bear the greatest power to transform our understandings, not an overindulgence in facts and statistics. This is why we rely on testimonies within any struggle to change the world. This appears to be Claiborne’s and Martin’s deepest hope in writing Beating Guns: to elevate the conversation on gun violence towards becoming more communal, creative, and transformative so that gun violence is ended. And by claiming that American gun violence is a gun and heart problem, I believe they effectively lay the groundwork to elevate and transform our current debate.

However, my main critique with their book is they fail to go into any depth on the nature of such a transformed dialogue. Through exegesis, they provide the theological foundation to their moral claim that Christians must help end gun violence. Through an in-depth socio-historical analysis they reveal that U.S. gun violence is a gun problem which has observable causes and thus concrete solutions. Finally, through personal reflection they honestly acknowledge that gun violence is also a heart problem prompting the claim that all Americans have a responsibility to ending gun violence. Yet, they do not provide much resources for moving such theology, analysis, and reflection into pragmatic engagement with one’s community. They discuss Jesus’ “third way” in their exegesis of the Sermon on the Mount and provide countless testimonies of how people creatively respond to gun violence. But they do not provide any tangible resources for pragmatic ways one may begin a truly helpful and productive conversation on gun violence. I raise this critique because if you’ve ever attempted to hold such an emotionally-charged dialogue, especially with the goal of developing consensus around a problem, you know it much more complexed and nuanced than bringing people together. I believe they hit on it with an emphasis on story-telling and listening. Still, I feel their lack of any further engagement is a missed opportunity for strengthening the pragmatic usefulness of this book.

Overall though, I am overwhelmingly thankful for this book. Once I finished I found myself wanting to jump up and get to work! My passionate response feels like the deep hope of Claiborne and Martin: that after reading their book, people will be compelled to act for change. I must admit, I came into this book already sympathetic to their arguments. Furthermore, I am not a gun owner. I enjoy shooting guns, but I am not a gun enthusiast. I state this, because I am unsure if someone who is resolutely opposed to any notion of gun laws would be convinced by Claiborne and Martin. Yet, this book’s strength is not in convincing people, but in cultivating a faithful and creative lens that understands gun violence is a problem that can be solved. Such a lens is hopeful, and perhaps hope is what we so desperately need right now. Because without hope, there isn’t much of an imperative to do the hard work that ending gun violence demands. After reading Beating Guns, and hopeful. And I am convinced my hope is not some pie-in-sky idealism but is real and true. Because now to see it any other way just seems too unrealistic. So in conclusion, if you are someone who is at the very least concerned with gun violence in America, I highly recommend you read Claiborne’s and Martin’s book. If you are someone searching for hope amidst America’s epidemic of gun violence, sit down with Claiborne and Martin and listen to them. I imagine you’ll be thankful you did.